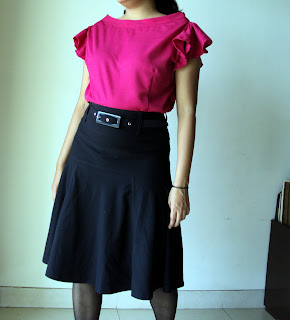 I have been a follower of the Weekend Designer blog ever since I started sewing. And I had this top in mind ever since I saw it. Its so pretty, isn’t it?

This is the first time I attempted something out of my comfort zone. Though I have drafted a couple of patterns before, they have been much simpler than this one. I took quite some time drafting this pattern and making a muslin. I did not want my eagerness to finish this, ruin the end product.

Yes, its also my first time making a muslin. I’m so glad I did since there were some changes that needed to be done. The neck turned out a bit too wide. Making a muslin is so very important for that perfect fit and to rectify mistakes at the pattern level. I wrote to Don who said that I could narrow the neckline by building up the shoulder seams and correct looseness by building up the front and back neck.

The only change I made while sewing is that I attached the ruffles to the armholes. According to the sewing instructions given, the sleeve only attaches to the upper part of the armhole and the ends hang free. I hand sewed the ruffle edges. I learnt how to make a rolled hem. Yaay! This is also the first time that I used darts in a wearable. 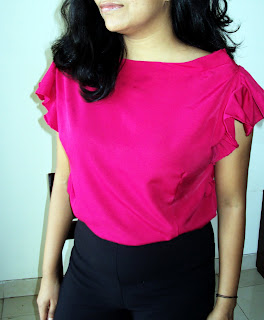 My first attempt at this pattern turned out  so wearable. I love it.

Thank you Don for helping me out and answering all my questions.